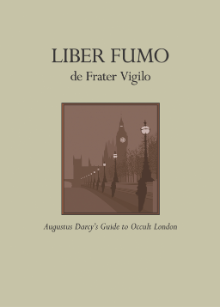 The Book of the Smoke, a.k.a. the Liber Fumo, is a fictional guidebook to the occult and supernatural of 1930s London, covering both real and fictional people, places, and happenings. It is also a supplement to Kenneth Hite’s Bookhounds of Londoni written by Paula Dempsey and published by Pelgrane Press.

The book is presented as the collected but incomplete writings of Augustus Darcy (deceased), investigator of oddities and brother of an unnamed occult fraternity. I have the paperback edition and the only time the conceit drops is the cover and the credits and copyrights pageii. Internally the book is typeset in period style and contains a selection of images (mostly paintings and illustrations) to augment the text.

At 19cm × 14cm and 157 pages it is relatively small for an RPG supplement, but the form factor suits its purposes well. The first twelve pages consist of a forward by the fictional publisher Amery Greville, a letter from Darcy, and an exhaustive table of contents. 116 pages are devoted to places in and around London, and 29 pages catalog figures of note on the occult scene. Sadly there is no index. Throughout the book entries are annotated with map references that match up with the plates in Bookhounds of London.

Each entry in the book is given a couple of paragraphs, with a few stretching to a few pages. As a miscellany, entries cover a wide range of styles and content: some are concerned with London itself, some anecdotal curiosities, and others are tied into the underlying story of the Book of the Smoke. Tonally many entries are weird, with a handful that are downright gruesome.

What is the purpose of all this? The Book of the Smoke is intended to be used as a source of inspiration for your Bookhounds of London games. Two specific approaches are suggested (Bookhounds of London pg. 128): As a tool from which the keeper can draw ideas and background information from, and secondly as a prop for players – suggesting a tone and even forming the core of a player-driven campaign.

Between the lines of the individual entries, a campaign about the future of London is established with hints about a showdown between major occult groups working in the shadows of the Smoke. This appears to involve the latent megapolicomancy lurking in London’s ancient designs, but its exact form is not obvious on a cursory reading.

On another level the book itself is a puzzle; Pelgrane has stated that the mystery of Darcy’s death can be solved with the bookiii. Darcy relates a number of events and anecdotes throughout the book that relate directly to him, and in addition to the lurking campaign there is a lot for the reader to be puzzled out.

Given that this is a Trail of Cthulhu supplement, the Mythos is notably understated, perhaps even appearing absentiv. Instead we see London filtered through Darcyv and his perspective as an occultist about town. This is a London filled with hauntings and weirdness but not tentacles and gibbering. Darcy doesn’t indicate any familiarity with the mythos and cannot correctly interpret what he has uncovered

These features – the subtextual campaign, the book as a puzzle, and Darcy’s perspective – emphasize what is possibly the most Lovecraftian aspect of the book. The reader and players are taking the raw, disconnected data points from another author (Darcy) and through their own investigations uncovering the deeper truth – and the associated lurking horrors. This forms a nested stories within stories structure that Lovecraft presented, for example in The Call of Cthulhu. You certainly couldn’t glean all the secrets of this book on a first reading.

The Book of the Smoke is a solid supporting tool for Bookhounds of London. As a keeper I would be more likely to pick and choose items of interest rather than present the magical war campaign, due to the amount of work I perceive being involved in groking the deeper secrets and tying them into the ongoing arc. In contrast, when used as a player’s aid or fat prop, this book should provide plenty of motivation for the player-driven scenarios that Bookhounds is so well set up for. My only concern with using this in an existing game is that it may alter the tone drasticallyvi. Lastly, the book is an entertaining read – if you are like me, you might find yourself puzzling over facets of the mystery for hoursvii.