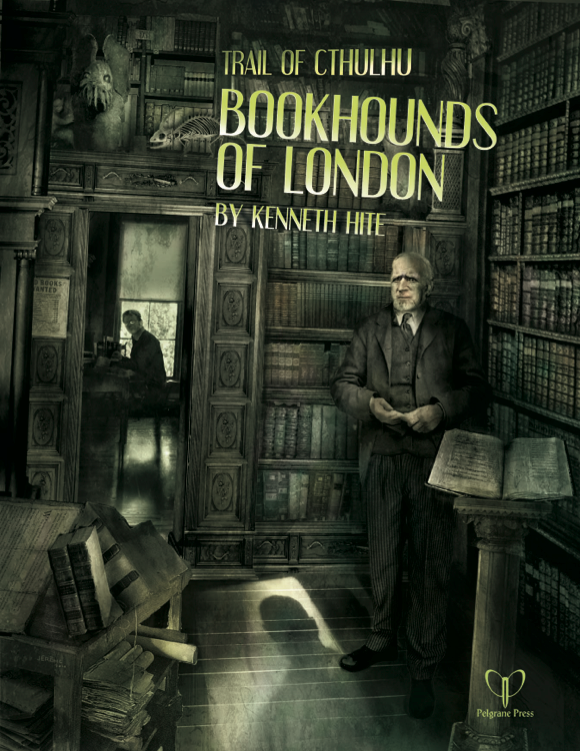 Bookhounds of London is Kenneth Hite’s latest supplement for Trail of Cthulhu (ToC), his Lovecraftian GUMSHOE adaption, both from Pelgrane Press. This book expands on the campaign frame of the same name briefly laid out near the back of the ToC rule book and shifts the setting to sketchy depression era London where the players play a group of bookhounds – book store owners, book scouts, catalogue agents, etc – trying to make some bread however they can. The setting expects the bookhounds to cross paths with, or even be hired by, misanthropes who seek treacherous tomes for villainous purpose whom the players will need to foil.

Bookhounds gives the group clear goals, a clear structure for how the game will run right from character creation onward, and an explaination for why they frequently run into malign activity. This includes developing the bookstore, the center of the characters’ setting, effectively as a secondary character in the party, even going so far as to have ongoing fortunes that change with the unfolding scenarios. By doing so it short circuits some of the common points of friction that can occur early on in investigative scenarios. If you are familiar with Pagan Publishing’s Delta Green for Call of Cthulhu you will see definite similarities around these practical considerations.

As one would expect from the title, this book contains a large selection of details on both books and London. Regarding books, everything from bindings and covers through to rules for auctions, ‘squizzes’ – a book of particular interest for a bookhound – important books and mythos tombs, and prominent libraries. This is all the sort of fine detail that a Keeper will find useful in fleshing out his or her scenarios.

Similarly London receives a broad and gameable treatment. Each major section of the city is covered with key points of history and colour, rumours (more on these later), potential contacts for the bookhounds, and possible mythos activity. Sidebars contain many sideline details and interpretations of history and myth suitable to inspire the Keeper. To round out this section there is a bestiary of mythos monstrosities in the now familiar Hitian ToC format, a small collection of NPCs with a format that will be familiar to readers of Robin Laws’ The Armitage Files (also for ToC) where they are presented with a set of possible motivations and potential mythos hooks, and a sidebar for a rival bookstore and its associated bookhounds.

In addition to all this detail about London itself, there is a large section of color plates containing period maps of the city, wider environs and important buildings. Not only are they excellent in and of themselves, they have been painstakingly indexed in extreme detail, and marked up with symbols that reference the forthcoming companion book Occult Guide to London. The optional magic system Megapolisomancy complements this great resource well providing a fun alternative magic system that takes advantage the topology of the city.

One sample scenario is provided: White Chapel Black Letter. As I have not played through this scenario yet I cannot comment on its actual quality but it reads well, has no obvious failing and provides a suitably Lovecraftian lose-lose complication for the players at the ending, however this particular detail may not be to the tastes of some groups.

Bookhounds provides additional commentary on preparing and running scenarios for the campaign frame. Three new campaign styles are provided with more naunce than the broad strokes of Pulp and Purist presented in the core book. These are Arabesque, Sordid and Technicolor. Arabesque emphasises an exotic view of London as a port of call for mysterious foreigners and a home to many ill wonders. Sordid is bleak and skeezy with the worst of humanity at the fore. Technicolor is a layer on either with lurid color.

More significantly much of the book takes a lead from The Armitage Files and provides more support for player generated scenarios. While the default assumption is that the Keeper will do the traditional legwork associated with concocting a devious investigation, there is a range of hooks to allow players to generate their own plots. These range from the very direct: There is a catalogue of rumours from around the city that the keeper is encouraged to parcel out to the players at the start of the campaign, and an associated record sheet for the players to record additional rumours they wish to chase down. There are also more subtle hooks: Squizzes that the player characters are interested in, rival bookhounds, etc. Where The Armitage Files may be intimidating to a group of players not used to such an improvised style of play, Bookhounds will feel more familiar but still allows for some distribution of the narrative thread.

Not only does Bookhounds make me want to run a game, it makes me feel confident that I could run that game well. Many supplements place the burden of extracting a game from their contents on the Keeper; this book does not. As an unconfident and less experienced Keeper, this is excellent. If you only get one supplement for Trail of Cthulhu, this should be it.